Most people are quite unfamiliar with burdock root. If you are a macrobiotics follower you may be able to understand it, because many dishes that make the body balance are made from burdock root, however it is difficult for the people who don’t practice macrobiotics to access and know about the burdock. Our customers often ask: What is burdock? What is the value of burdock? How to process? How to use it? How price? etc. Since there have a lot of questions in term of burdock, we would share an entire article as below.

What is Burdock Root?

Burdock root is a vegetable that’s native to northern Asia and Europe, though it now grows in the United States, too. Japanese normally make use of this root for daily meals. The deep roots of the burdock plant are very long and either brown or nearly black on the outside, lightly aromatic, both little sweet and bitter. The root is commonly used in cold weather or in illness, it brings positive energy for the body.

In Vietnam this root has been planted in alluvial areas along Hong river, especially in the middle of the river because of alluvial soil and spacious delta. Nowadays there are also many places to grow the burdock. Some people tend to import this root from China to make a business. Actually there are totally differences of burdock root between Vietnam and China. Vietnam’s root is darker in color than China’s one, in addition Vietnam’s burdock has many small roots surrounding whereas China’s ones hasn’t got any small roots surrounding and the root is in shape of flat bulb.

Usually the large number of people have a habit of taking medicine when getting sick or for Vietnamese buy swallow’s nest or ginseng to nourish the body. However, there has a better way to cook burdock root for both eating and treating disease, it is useful for the body to get a balance back.

The value of Burdock Root

Burdock root is an important element of Tekka that is one of the yang foods in macrobiotics. It can be made by various cooking way including boiling, stir-frying or frying with oil. Nearly best taste of burdock comes from the its crust, thus it is better to use brush to clean the dust from crust then wash with water. Additionally, burdock root can be cooked with the other vegetables or cereals or fried seaweed but it is not delicious when combining with other dark seaweeds.

There are two usage forms of burdock roots: fresh (by season) and dry (cut in small slices & dry)

The dry one is used to make tea, vegetable broth, soup. You can store dry burdock to cook for winter. 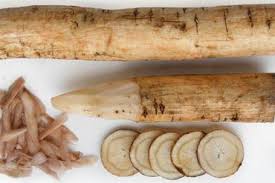 With the great benefits above, Bao An Macrobiotics hopes that the article would be useful with many people to stabilize and balance body, improve health.